To understand contrails and sort out the chemtrail issue, we must first know a few things about the aircraft responsible for them. So let’s start at the beginning. 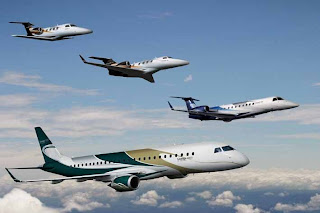 An Extremely Brief History of Jet Travel
A jet aircraft is, quite simply, any aircraft powered by a jet engine (rockets and cruise missiles are also jet-propelled, but don’t really enter into the chemtrail issue). They are not the only aircraft that can form contrails, as we’ll see in the next post, but there’s no question that jets are responsible for most of the contrails seen in our skies.
The first turbojet aircraft to take to the air was a top-secret Luftwaffe prototype, the Heinkel He 178. It was tested over Rostock in August of 1939, precisely one year before the first publicized flight of a jet aircraft, the Caproni Campini N.1. (1)
The advantages of jets over propeller-powered aircraft were obvious; they can climb faster, fly faster, and fly higher than planes with piston engines, reaching altitudes of 33,000–49,000 feet (even higher in the case of the Concorde and experimental craft like the White Knight Two). (1)
Jets played an enormous role in WWII, of course, but it wasn’t until thirteen years after the first jet flight that commercial jet travel was introduced. Starting in 1952, the British Overseas Airways Corporation (BOAC) operated the first commercial jet service, with flights between London and Johannesburg. The first jet airliner was the de Havilland Comet, first flown in 1949. By 1958, Comets had been nearly supplanted by the more reliable Boeing 707 and Douglas DC-8. (2)
These early airliners were teeny-tiny compared to those we see today. The original Comet held only 36 passengers, and the first transatlantic Boeing 707 flight carried just 111 people – an astonishing number at the time. (2) The world’s first widebody (“jumbo”) jet, the Boeing 747 (introduced commercially in 1970), held the passenger capacity record for nearly 40 years, with a maximum of 452 passengers per flight on the 747-100 and 660 passengers on the 747-400 (for years, the world’s most commonly-used model). Its current incarnation can hold up to 605 passengers. The Airbus A380 , today’s most popular jet model, now holds the passenger capacity record; it can carry up to 853 people. And these aren’t even the largest or heaviest jets in the sky!
Altitude has also increased dramatically. The first Comet had a cruise altitude of 42,000 feet, while the hulking, supersonic Concorde can reach nearly 60,000 feet.

There are two main types of civilian passenger airliner: long-haul jumbo and widebody jet airliners, and short-haul passenger jet airliners. Today’s jets have two to four engines, which can be located on the wings, fixed above the stabilizers in the rear of the plane, or integrated into the tails.

How Many Jets are in the Air?

Estimates of how many aircraft are in the sky on any given day range from 13,000 to 20,000.
An estimated 13,000 planes fly over the U.S. on the average day, Patrick Minnis, a senior research scientist at NASA’s Langley Research Center, told Chicago Tribune reporter Ronald Kotulak in August 2002, the same week the results of a groundbreaking study of contrails were published in Nature. (3)

A USAF pamphlet on contrails states there are approximately 60,000 daily flights over the U.S.

Whatever the specific number, there can be thousands of planes in U.S. airspace at one time, as shown by the animations of the NASA-developed FACET simulation software. One particularly fascinating FACET series, “A Typical Day in U.S. Airspace” is currently available on NASA’s website. It shows aircraft, depicted as tiny yellow dots, swarming U.S. airspace like ants moving over an anthill. We first see an average day of flight patterns, with yellow dots teeming along the East Coast, then an example of how flights are redirected to avoid bad weather. Finally, we are shown what air traffic looked like on 9/11: A flurry of dots swim across the screen, start to fade, then blink out entirely.
During peak hours, there are roughly 5000-6000 planes flying over the U.S. In 2005, the flight-tracking website Flight Aware published “A Day in U.S. Airspace“, showing 5664 aircraft over the country at 2:00 PM (CDT).

While chemtrails have only been a going concern since the late ’90s, the potential effects of the increase in air traffic over the past 40 years have been avidly studied since the early ’70s. You’ll be seeing a rundown of that research in the next post. For now, here are two examples:

The Parts of a Jet

Before delving into the chemtrail issue, it’s essential to have a basic understanding of how jets are constructed. As we’ll see, misidentification of planes and airplane components can lead to much confusion when it comes to contrails. In particular, observers frequently mistake the various parts of a jet wing for specialized, chemtrail-related equipment. The illustration below shows where some of the key jet components are located and what they do (from a NASA diagram). 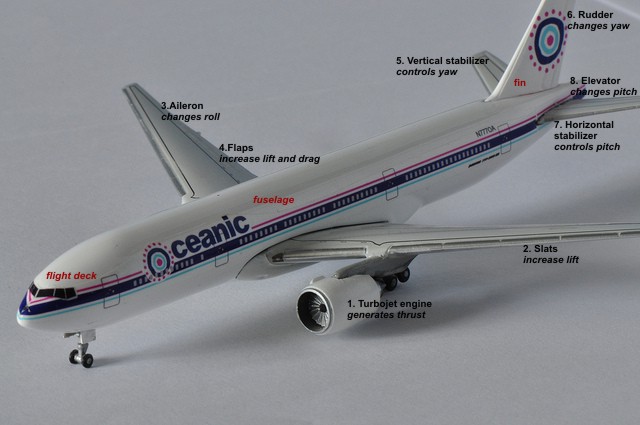 In this video, a pilot identifies the components of a jet wing.

Here’s an example of how ordinary jet components can be mistaken for chemtrail equipment. The video below is said to show a chemtrail being sprayed from special nozzles beneath a jet’s wings.

I asked Captain Bruce Sinclair, a pilot with 46 years of flight experience, to view this video and explain what’s going on in it. He pointed out that the “chemtrail spraying” stops at precisely the same time that the plane’s three engines stop contrailing. The “nozzles” are not nozzles at all, but the fairings around the flap actuators (the mechanisms that move the flaps). In other words, this is an ordinary jet contrail.

Many photos that are thought to show jets spraying chemtrails are actually photos of highly specialized aircraft. You can see several examples of this mistaken identity at the website Contrail Science.

Many chemtrail theories rely heavily on the assumption that it is simple and inexpensive to add chemicals or metal oxides to jet fuel. In fact, jet fuel production is tightly controlled because fuel is expensive and must contain as few impurities as possible.

The most common commercial jet fuels are called Jet A and Jet A-1. Jet A is available only in the U.S. It has a higher freezing point than A-1, and does not have to contain an antistatic agent like A-1 does.
Jet fuel is pricey stuff. In 2008, a record 25 airlines declared bankruptcy or stopped operations, thanks in large part to the high cost of fuel. Just this week, Delta Air Lines (which came out of bankruptcy in 2007) became the first airline to purchase its own refinery, in an effort to reduce its $12-billion-a-year fuel costs. Synthetic fuels and biofuels are currently being tested and used on a very small scale, in the hopes that an affordable alternative to petroleum-based fuel can be developed. (5)
Military jet fuel is a different story. Though it has the same basic ingredients as commercial jet fuel, it is often highly specialized for specific aircraft.

Jet fuel additives are always extensively evaluated and tested, as anything added to the fuel could adversely affect engine performance and safety (metals, in particular, are something you don’t want to add to jet fuel;  even trace amounts can have disastrous effects on the thermal stability of the fuel).
For this reason, producers hew to the jet fuel standards set by ASTM International (formerly known as the American Society for Testing and Materials), known as the ASTM D1655, and/or the Defence Standard 91-91. Jet A must meet the ASTM D1655 specifications, while Jet A-1 has to meet the specifications for Defence Standard 91-91, ASTM D1655, and the specifications of the International Air Transport Association (IATA) Guidance Material (Kerosine Type), NATO Code F-35. (5)  Jet A-1 is a high-quality fuel. If it doesn’t pass purity and quality tests, it is sold off to ground-based consumers rather than being used in jets. (6)
Currently, the ASTM D1655 specifications allow for the following additives to be added to jet fuel (often these are added in extremely small quantities, measurable in parts per million):

Aside from the Stadis 450, which we’ll examine in another post, note that there isn’t anything on this list that would account for the metals thought to be in chemtrails (barium, aluminum, titanium, and strontium). Nor does the fuel itself contain them.
But it must be noted that aviation fuel emissions do contain toxic pollutants. The combustion of jet fuel during flight causes aircraft engines to emit carbon dioxide, nitrogen oxides (in small amounts), carbon monoxide, sulfur gases, and soot. (8) Jet emissions have also been found to contain particles of zinc, beryllium, lead, vanadium, and copper. (9) Note that these are heavy metals, unlike the alleged chemtrail metals.
I ask you, how is this any better than what’s supposedly being found in chemtrails?

In 2007, the Discovery Channel program Best Evidence examined chemtrails. A team led by Dr. Gregory W. Davis at Kettering University’s Automotive Engine Research Laboratory tested five gallons of randomly selected jet fuel from a Flint airport, running it through a small jet turbine. They ran an array of tests on the fuel itself and the emissions, looking for aluminum (the metal most frequently mentioned in connection with chemtrails). They found none. They did find some sulfur in the emissions, though.