Radioactivecontamination in shiitake mushrooms has raised public clamour for compensation 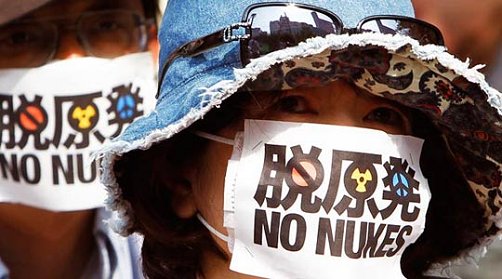 An anti-nuclear protestertakes part in a rally in front of Tokyo Electric Power Co’s headquarters inTokyo. The company has yet to determine how much it will have to pay residentsand businesses near the Fukushima nuclear plant, who were forced to evacuateafter the March 11 earthquake and tsunami caused deadly radiation leaks.(Yuriko Nakao / Reuters)
By SuvendriniKakuchi
Inter PressService
April 10, 2012
TOKYO ~ The discovery ofradioactive contamination in ‘shiitake’ mushrooms grown in Manazuru town,Kanagawa prefecture, some 300 km away from the crippled Fukushima Daiichinuclear power plant, has raised public clamour for compensation.
Soon after the discovery,on Apr. 5, Kanagawa authorities directed farmers and organizations dealing withagricultural produce not to ship shiitake mushrooms, a delicacy prized for itsnutritive and medicinal properties in East Asian countries.
Some of the Manazurumushroom samples were found to have over 141 becquerels of radioactive cesiumper kg, while samples taken from Murata, Miyagi Prefecture, showed cesiumlevels as high as 350 becquerels.
The discovery comes asresidents of areas surrounding the Fukushima Daiichi reactor, hit by a massiveearthquake and tsunami on Mar. 11, 2011, are raising compensation demands fromthe Tokyo Electric Power Company (TEPCO), the operator of the Fukushima Daiichiplant.
ED: Exactly what caused thisdisaster is unknown although the blame is placed on an earthquake, althoughthat explanation has come under fire. Some believe the cause of thegeographical upset to have been the result of unnatural causes.
Residents of the oncescenic Odaka village, located 10 km from the plant, who have been forced toabandon their farms, schools and homes, have pinned hopes for adequaterecompense on a lawsuit they filed against TEPCO in February.
“The lawsuit is theonly thing we have to give us some meaning to our lives after we lost ourhomes, livelihoods, community and the trust we had for the authorities,”Susumi Yamasawa, who heads a local citizen group that has filed the suit, toldIPS.
Yamasawa, 69, a farmerwho had cultivated rice for decades in Odaka said: “Life was peaceful andwe did not worry too much about risks from the nuclear plant nearby until theaccident.”
“The hardest isseeing our close-knit community disintegrate,” Yamasawa said. “Youthand children have left the area to avoid the radiation risk. The future isbleak.”
Yamasawa’s lawsuit addsto a whole clutch filed by citizens affected by the nuclear accident who areblaming the government and TEPCO for the predicament they find themselves in.
“Patience is runningout,” Ryuzo Sato, an Odaka resident, told IPS. He feels that theavailability of temporary housing, monetary reimbursements and livingallowances can never fully compensate for what the residents have lost.
Officials reported lastmonth that TEPCO may have to pay out 56.2 billion dollars ~ a figure that couldescalate ~ in compensation for business and financial losses from the nuclearaccident. More than 1.7 million people have been affected to varying degrees.
Hiroyuki Kawai, who isleading 42 shareholders in their bid for compensation from TEPCO for negligenceat the tsunami-sparked disaster at the plant, said senior managers must be madeto pay personally.
The TEPCO shareholdersare suing 27 executives of the company for 68 billion dollars, a record sum inthe world.
Kawai, who hasrepresented several anti-nuclear movements in Japan, said the case is aimed atfixing individual responsibility for the drastic mistakes made by members ofthe TEPCO management.
“TEPCO failed totake into account earthquake and tsunami warnings that were made by researcherswho pointed to the huge risk posed on the Fukushima nuclear reactors from adisaster…The accident clearly points to negligence and irresponsibility on thepart of individuals who represent the management,” Kawai said.
Yui Kimura, ashareholder, told media on Mar. 27 that the plaintiffs had repeatedly raisedthe issue of risks to the nuclear plant from an earthquake and tsunami, but themanagement ignored their concerns.
“The Japanese systemis such that TEPCO is not investigated by prosecutors for their mistakes. Ourdecision to go to courts is to force the individuals who made the mistakes totake personal responsibility and pay from their own pockets,” she said.
TEPCO has assigned payand bonus cuts on its employees and set up panels to collect compensation. Theutility has borrowed public money and is reporting a 7.6 billion dollar lossafter the decommissioning of the Fukushima nuclear reactors.
Kawai said the crux ofthe lawsuit is to reform the Japanese system which allows failed directors tohide behind the corporate wall, stepping down from their positions when theymake a mistake, but nothing more.
“The only way toremedy an unfair the system is to get the people who made the wrong decisionsto pay for their mistakes using their own assets,” Kawai said.
Reports issued after theaccident illustrate lack of an emergency manual in TEPCO to deal with a severeaccident and blatant disregard for safety measures in the plants includingsafety drills.

“When we used toprotest against nuclear power, we were looked down upon by the public asstrange people,” said Kimura. “Now they know the truth and supportus. Nuclear power is about vested interests. We must stand up and protectlife.”

The Fukushima crisis couldhave been prevented if TEPCO had carried out simple preventive measures, suchas placing an emergency power source on higher ground, Kawai said.
Radiation leaked over alarge area, forcing tens of thousands of people from their homes and renderingfarming impossible in an ever-widening radius – as illustrated by theradioactive shiitake mushrooms in Kanagawa prefecture, part of which falls inthe Greater Tokyo metropolitan area.
On Mar. 17, a governmentpanel recommended that about 74,000 dollars be paid to each individual unableto return home for the next five years because of radiation contamination ~though this is seen as inadequate.
The money is alsointended to compensate for the mental suffering of evacuees whose homes”are in a zone where it is difficult to return for a long time,” saidthe compensation panel under the ministry of education, culture, sports,science and technology.
Victims who fall in thatzone will receive the full value of their real estate, as calculated before thedisaster struck, if the recommendations of the panel are followed.