Britney Spears and Iggy Azalea were born on opposite sides of the world, but their videos “Work B*tch” and “Change Your Life” contain the same exact hidden meaning. Indeed, the symbolism of these videos are both celebrations of the mind control culture of the Illuminati entertainment industry, especially Kitten Programming. 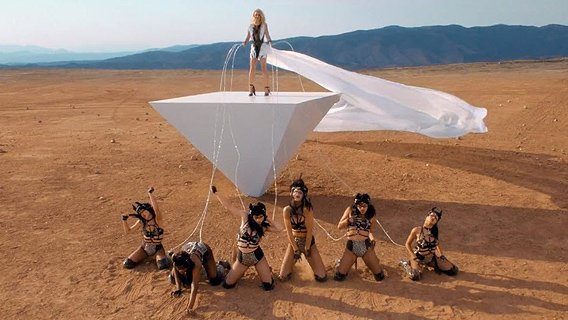 There are plenty of differences between Britney Spears and Iggy Azalea: Britney is from the U.S. while Iggy is from Australia; Britney is a veteran in the music business while Iggy is a newcomer; Britney sings pop while Iggy raps. Despite these surface differences, they both ultimately work for the same bosses who use their sex appeal to push the Illuminati Agenda. Work B*tch and Change Your Life were both released around the same time, they both take place in a “Las Vegas showgirl” context and they both convey the same exact twisted message: Being an industry Kitten is great because it will make you rich, famous and even powerful. Both videos are all about glamorizing the Mind-Control culture the occult elite revels in – although it is all about violent, disgusting and sadistic exploitation.

While on the surface, these videos appear to be about “empowerment” (I hate that word), they are actually celebrating the entertainment industry’s exploitation of victims of Kitten programming. (If you’ve never heard of Mind Control or Kitten Programming, read this article first).

Let’s look at the insidious symbolism of these videos.

When one knows about Britney Spears’ actual living conditions and mental state in the past few years, watching Work B*tch becomes somewhat difficult, as its message is ironic in the saddest way possible. In my several articles on Britney, I have described how, since her meltdown, she has become a literal slave, heavily medicated and with absolutely no power over her career, finances or personal life. Britney has been living under the conservatorship of various handlers since 2008, meaning that, during all of these years, she has never gained back control of her life.

Considering these facts, the lyrics of Work B*tch become somewhat disturbing, as they appear to be words a pimp who say to his “employee”. Or what a Beta Kitten handler would tell an MK slave (like Britney) …

In the song and video, Britney plays the role of the handler who is yelling stuff at her slaves … the same kind of stuff she is probably told on a daily basis. Like most of Britney’s recent releases, the song is almost ridiculing her condition, as if her handlers are saying: “Look at what we’re doing with her. We’re making her sing about her own captivity”. To make things worse, Britney sings the song with a British accent. While, at first glance, this fact might be trivial, remember that in 2008, when Britney went through a gigantic meltdown, she was caught speaking with a British accent – a symptom of Multiple Personality Disorder, which is itself a symptom of Monarch Programming. Here’s a 2008 article about the meltdown and her British accent:

Britney Spears has a new accessory to go with her pink wig: a British accent.

In the last several weeks, Spears, 26, has been videotaped numerous times trading her Louisiana twang for U.K. inflections.

“She had the English accent thing going the whole time” while shopping at Kitson last Thursday, according to a source. “It didn’t stop.”

Even when angry, the accent appears. On an L.A. shopping trip to Macy’s on Jan. 13, she screamed at the paparazzi, “Get out of my G—— face!” – in a British accent.

So is it all in fun or has she flipped her pink wig?

“When someone has dissociative identity disorder” – formerly known as multiple personality disorder – “each identity is split off from the other,” says L.A. psychologist Renee A. Cohen, who is not treating Spears. “Each identity would have its own name, memories, behavioral traits and emotional characteristics.”

Cohen says the critical question is: “When Britney uses the British accent, or appears to take on another identity, does she know she’s Britney Spears?”

“Otherwise, she could simply be behaving this way for attention, for sympathy, or any other reason,” adds Cohen. “It’s foolish to attempt to diagnose her without a formal evaluation.”

One possible influence could be Spears’s maternal grandmother, Lilian Bridges, who was originally from England.

According to paparazzi who trail the singer around the clock, one thing is for sure: the pink wig means something’s changing.

“When she puts on the pink wig, you just know something crazy is about to happen,” said one paparazzo.

Knowing this fact, making Britney sing in a British accent is almost a code for showing that she’s embodying another persona. She’s a MK handler. 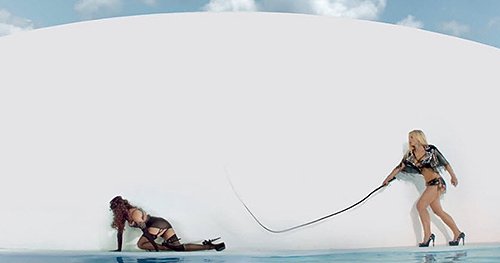 In the video, Britney bosses around Beta Kitten slaves around (they even have kitten ears), whipping them into submission and calling them bitches. Knowing Britney’s condition, this is all rather twisted

This scene defines the entire video. Britney is holding Beta Kittens on a leash, controlling them. She stands on an inverted pyramid, perhaps to highlight the fact that Britney is actually NOT at the top of the pyramid. She is actually at the bottom of it, not unlike these leashed kittens.

Some might say: “That’s an empowering video! Britney is being empowered! She empowers her fans by seeing her being so empowered!” Did I mention that I hate the word “empowered”? To empower means “to give power”. Watching a video does not give you power. It actually accomplishes the exact opposite. Those who use the word “empowering” to describe a music video remind me of a Simpsons line about the word “proactive”: “Excuse me, but “proactive” and “paradigm”? Aren’t these just buzzwords that dumb people use to sound important?”.

Britney herself admitted that she was not “empowered” by the video. Shortly after the release of the video, Britney called a radio station and stated that she was pressured into its highly sexualized concept, something she wants to stop doing ever since she became a mother. However, as stated above, she has no power over her own life or work.

Is Britney Spears being pressured to be overly sexual? That’s what the pop star implied during a radio interview.

Spears told a Boston radio show that she wants to be more modest but she’s pressured to maintain her sexy image. When discussing her latest music video for “Work Bitch,” Spears said she made editors cut out a lot of the sexed-up scenes.

“Oh my God we showed way more skin and did way more stuff for the video than what is actually there,” she said. “I cut, like, out half the video because I am a mother and because, you know, I have children and it’s hard to play sexy mom while you’re, you know, being a pop star as well.”

The radio host then asked Spears straight out if she had people pushing her to shoot sexy scenes. She laughed and replied “Yes.”

She said in her ideal world, her image would be different.

Towards the end of the video, we see blindfolded mannequins being brought into the desert. They then explode.

Blindfolded mannequins represent the state of mind controlled slaves. Blowing them up into body parts represent the fragmenting of a slave’s psyche into several personas. This image is used in several videos including Beyonce’s “Crazy”.

Work B*tch is therefore another tribute to Britney’s own mind control status. While her situation is sad and disturbing, however, it doesn’t stop new artists from following in her footsteps.

Iggy Azalea is a rapper from Australia who moved to the United States at the age of 16. She soon got signed by Interscope Records and almost immediately embraced that sweet, sweet Illuminati symbolism. 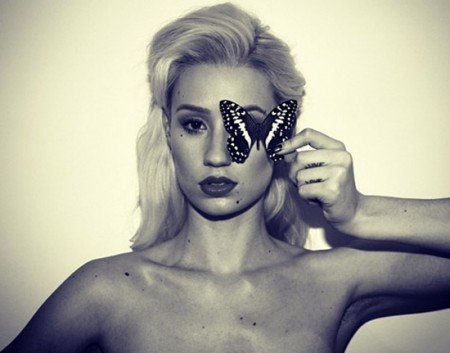 Iggy is now signed with Island Def Jam (also home to Rihanna, Kanye West and many others) and her single Change Your Life confirms that she’s there to push the Agenda.

Inspired by the movie Showgirls, Change Your Life depicts Iggy as a Vegas dancer and T.I. as a club owner. While this premise is simple, when ones understand the symbolism of the video, it becomes the story of a Beta Kitten being initiated in the Illuminati industry.

Iggy lays in bed with a baby tiger – a reference to Kitten Programming.

As its title states, the song is about Iggy apparently being able to “change your life” – going from rags to riches and so forth. Here are the lyrics of the chorus:

Have you ever wished your life would change?
Woke up and you lived your dreams
Baby I could help you make that change
I could show you how to do this thing

While these lyrics are as “empowering” as Britney’s Work B*tch, the video depicts Iggy as dancer who doesn’t like her boss/pimp. In other words, she doesn’t have power. Like Britney’s song, it appears that the Illuminati is talking THROUGH Iggy, subtly letting young people know that “changing their lives” implies being exploited by the Illuminati industry. We once again see a twisted association between “making it big” and being an industry Beta kitten and, through symbolism, the video shows Iggy’s initiation into the Illuminati industry.

Although Iggy does not appear to like the club owner played by T.I., she nevertheless gets intimate with him on the hood of a car. Why? Because that’s what Beta Kittens do. On a more esoteric level, she wears a red dress, the symbolic color of initiation.

Is copulating with her boss/handler a requirement in order for her to “change her life”? Does this represent the ritual initiation into the Illuminati industry?

After the encounter, we see a new Iggy in town. 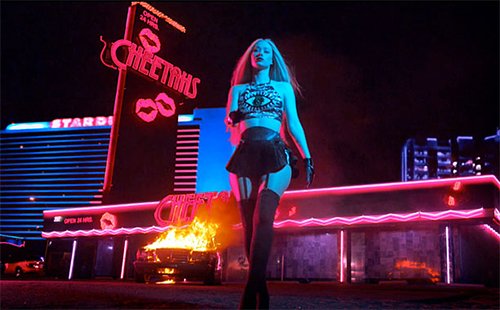 As if to denote her initiation, she is wearing a top featuring a big All-Seeing Eye. She stands in front of a club named Cheetah, which is another clear reference to Kitten Programming. She sets fire to a car (is it her boss’?) to represent the “burning” of her old life.

In a scene that is shown in parallel to the one above, Iggy is dressed in white and is arrested by the police. Did she get arrested because she lit that car on fire? If that’s the case, why is she dressed differently and why is this scene playing at the same time as the one above (and not after)? In actuality, this scene can represent what happens after initiation in the industry: the “good girl” dressed in white “is taken away for good” while the Illuminati-girl dressed in black (with an All-Seeing eye) remains.

Is that what Iggy means by “Once you go great, you never go good”? In the words of Iggy, once you’re initiated: “You never go back, even if you could”.

Released around the same time, Britney’s Work B*tch and Iggy’s Change Your Life are similar in several ways: They both depict the artists as Vegas dancers, they are both drenched in Kitten Programming imagery, the lyrics are both written from the point of view of those controlling them and, more importantly, both have an psuedo-empowering message that revolves around the glorifying being an industry Beta Kitten.

Sadly, to “make it” in the Illuminati industry, stars must sell their bodies and give up their soul. This process is celebrated in these videos and sold to young girls around the world. Furthermore, as the MK symbolism of the videos subtly imply, these artists who “made it” are not in control of what’s happening – they’re actually slaves to their owners. Britney Spears’ life is probably the most transparent case of a pop star under heavy mind control. In a rare moment of clarity, Britney went on record and stated that Work B*tch went too far and was too sexual. However, she did it anyway … because Beta slaves do not call the shots in their own lives. What did Britney’s handlers tell her when she was opposed working on that video? “You better work b*tch”.