Brief Reflections on the Mayan 2012 Date 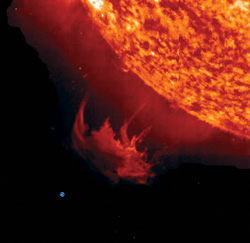 The 2012 date of the Mayans is a topic I have given serious thought to, and indeed I include discussion of the subject in a forthcoming book.1 To cut to the chase, let me state that I do not believe that anything dramatic, catastrophic, or cataclysmic will necessarily happen during the year 2012. I have never been a “believer” in the exact precision of the date.

I consider 2012 to be much more figurative than literal. Figurative, that is, in the sense that something will happen, but not necessarily in 2012, nor precisely on 21 December 2012.

Rather, I believe that at some point in the first half of the twenty-first century a major catastrophe may well occur on our planet. What the nature of this event will be, we cannot be absolutely certain; however, much of the evidence points to an extreme solar outburst.

The level of solar activity has been exceptional in recent times (the last two centuries or so), and we must go back over eight thousand years to find comparable levels.2 During the last period of extreme solar activity, marked by the Sun belching out major solar flares, coronal mass ejections (CMEs), solar proton events (SPEs) and the like, an ice age was brought to an end.

The modern ramping up of the Sun is evidenced by the 1859 Carrington Event, a major solar outburst that if it happened today would cause widespread devastation to much of our modern infrastructure, including power grid systems, communications systems, and virtually anything and everything of an electronic/electrical nature. A comparable, or greater, solar outburst could occur today, tomorrow, or twenty years from now. We just do not know when.3

According to standard correlations and analyses, the end date of the current Mayan calendar cycle falls on 21 December 2012. This date, a Friday, corresponds to the winter solstice in the Northern Hemisphere. That the Mayans picked this as the “end point” of their calendar may be significant. The fact that they could pick it, as they appear to have done, over a thousand years in advance demonstrates high-level astronomical knowledge and sophistication.

Furthermore, I believe the case can be made that the Mayan astronomers realised that on the Northern Hemisphere winter solstice date of 2012 the Sun would be in alignment (as viewed from Earth) with the plane of our Milky Way Galaxy. On the winter solstice the Sun is lowest in the sky and the daylight time is the shortest of the year. This is in concert with the imagery of catastrophe, but to me does not necessarily mean that catastrophe will hit precisely on 21 December 2012.

In my opinion, the “end point” of the Mayan calendar could be a metaphor and warning for that which is imminent, but not a precise prediction of when the catastrophe will occur.

An important issue that must be addressed is whether the Mayan calendar has been accurately correlated with the modern Gregorian calendar. Does the “end date” really correspond to 21 December 2012?

The most commonly used correlation today, which is the one that comes up with the 21 December 2012 end date, is known as the GMT correlation, named after the initials of the three researchers involved, Joseph Goodman, Juan Martinez-Hernandez, and John Eric Sydney Thompson. This standard correlation dates back to the first third of the twentieth century. The GMT correlation is linked to astronomical events recorded by the Mayans, and when precisely these events occurred, as a way to synchronise the Mayan and modern Gregorian calendars. If the astronomical events are misdated or misidentified, then the correlation is called into question.4

Gerardo Aldana (of the University of California, Santa Barbara) has his doubts about the GMT correlation; in particular he questions the accuracy of modern interpretations of some of the Mayan astronomical observations.5

For instance, in one case a certain Mayan reference has generally been assumed to refer to the planet Venus (one aspect of the Mayan calendar relied heavily on the cycles of Venus), but it may in fact refer to a meteor. If such is the case, it throws the standard GMT correlation into doubt. Aldana points out a number of reasons why the GMT correlation may not be accurate, although he does not propose a new correlation.

If the standard correlation is off (although it is not yet proven that this is the case, it is probably not wise to put to much blind faith in the GMT correlation), then how far off could it be? How imprecise is the 21 December 2012 date? Possibly it is off only on the order of 60 days,6 or perhaps it is off by a century.7

For some this potential inaccuracy in the Mayan calendar correlation will serve as an excuse and rationale to dismiss the entire “2012 issue” as New Age nonsense. In my opinion, as I mentioned at the outset, it is a non-issue since I have never taken the precise date, or year, as definitive. Rather for me the significance of 2012 is that something will happen! Whether the catastrophe hits in 2012, 2025, or 2050, we would do well to be prepared.

1. I write this (21 January 2012) after having just sent the text files to the publisher. At this point it is premature to formally announce the book. When the time comes, I will post information on my website: www.robertschoch.com

ROBERT M. SCHOCH received a Ph.D. in Geology and Geophysics from Yale University, and since 1984 has been a full-time faculty member at the College of General Studies of Boston University. His books include the trilogy with R. A. McNally: Voices of the Rocks, Voyages of the Pyramid Builders, and Pyramid Quest. His most recent book is The Parapsychology Revolution: A Concise Anthology of Paranormal and Psychical Research (Compilation and Commentary by Robert M. Schoch and Logan Yonavjak, Tarcher/Penguin, 2008). Dr. Schoch’s personal website is located at: www.robertschoch.com

Read this article and much more on the Mayan Calendar & 2012 by downloading
your copy of 2012 New Dawn Collector’s Edition (PDF version) for US$7.95