From Twin Peaks to the Tilted Kilt, sexed-up dining chains are popping up everywhere
By Anne Kingston
MacLeans Magazine
April 25, 2012
If you’ve not yet heard of “breastaurants,” gird yourself: they’re about to roll out across Canada. And this new generation of mammary-centric casual dining chains ~ with their slick thematic formats, man-cave mentality and hyper-friendly female servers schooled in “touchology” ~ makes Hooters seem downright quaint. 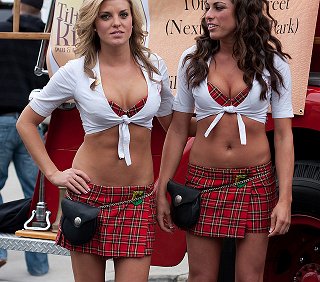 First out of the gate is Tilted Kilt, a Tempe, Ariz.-based “Celtic”-themed sports pub chain whose servers wear tiny tartan tops and micro-mini kilts. Originating in Las Vegas in 2003, the Hooters-Brigadoon hybrid has 60 locations in the U.S. with 15 franchises in development.
.
Its first Canadian location opened in Edmonton last December; a Toronto franchise will open in June, with a Calgary outpost slated for July. “We’re racing to have it finished before Stampede,” says Mark Hanby, Tilted Kilt’s vice-president of development. Hanby admits the company “had serious butterflies” about opening in Edmonton, but now expects the chain’s average annual per-location sales of US$2.7 million to be higher north of the border, in part because of higher prices.
The Calgary location is 8,000 sq. feet, bigger than the chain’s average 6,000- to-6,500 sq.-foot floorplan in the U.S. Hanby, who has scouted the country, says Ottawa, Halifax and Saint John, N.B., are ripe for the concept. He hopes to see six locations in the Toronto area by the end of 2013.
Over the past decade, the “breastaurant” has emerged as the second-fastest growing sector in the casual dining industry behind upscale burgers, says Darren Tristano, an industry consultant with Chicago-based Technomic, Inc., who coined the “breastaurant” neologism in 2007. Puns and plaid go with the territory.
Addison, Tex.-based Twin Peaks, founded in 2005, has 20 U.S. locations with plans for another 30 by year-end. It exploits an Alpine lodge theme with “scenic views” provided by “Lumber Jill” servers in skimpy plaid shirts and hiking shorts. Canada is on Twin Peaks’ radar, says marketing director Meggie Miller: “We’ve received lots of interest and we’re open to seriously considering qualified [franchisee] candidates.”
Meanwhile, regional players are thriving in the U.S., among them Brick House Tavern & Tap, Honey Shack, and Bone Daddy’s House of Smoke, which boasts “BBQ, beer, and Daddy’s girls” in midriff-baring sweaters.
“Breastaurant” customers are 80 per cent male, range in age from 21 to 35, and are not necessarily single, says Tristano. Tilted Kilt’s clientele skews slightly older at 38, says Hanby, who notes they’ve had success near Florida retirement communities and military bases.
As retrogade as it may appear, the “breastaurant” trend is propelled by current cultural and economic trends. The spectre of scantily clad women that made Clearwater, Fla.-based Hooters a target of outrage when it opened in 1983 is now engrained culturally, down to near-naked barristas manning “sexpresso” stands in the Seattle area.
Vancouver-based Earls Kitchen and Bar, for example, has morphed from casual preppy servers in the 1990s to female servers in form-fitting black cocktail gear. “We’ve grown up,” says Cate Simpson, spokeswoman for the 63-location chain. She admits some servers’ skirts are so short they’re thinking of imposing a dress code: “They look great but we have to keep a standard.”
The fact that Hooters allowed its brand to wither provided an opportunity, says Tristano, as did the availability of locations with good lease rates due to the economic downturn. Hooters, a US$1-billion juggernaut with 455 locations (11 in Canada), has become as dated as its servers’ suntan-coloured pantyhose and orange nylon shorts. Sales declined more than 7.5 per cent last year. Over a dozen locations have closed and its CEO recently jumped ship to Twin Peaks.
The “breastaurant” concept resonates amid economic and gender-role uncertainty. They’re proletariat men’s clubs, soothing public man caves where guys go to bond, drink cold beer and watch the game without being told to put the toilet seat down. Sales are 50 per cent alcohol; menus are defiantly masculine: pulled pork, burgers and wings. Twin Peaks taps into to the mindset with its slogan:

“Twin Peaks is about you, because YOU’RE THE MAN!”

Brick House Tavern & Tap offers built-in “man caves” ~ seats of four nestled in front of big-screen TVs. Bone Daddy’s even has a free “VIP” club.
It’s an ethos that fits with what the American cultural critic Susan Douglas calls “enlightened sexism” ~ the notion that formerly “sexist” depictions of women are harmless, even fun, when presented with an ironic wink. “We’re a place that makes fun of men; women are this, sports are that,” Twin Peaks CEO Randy Dewitt has said.
The big draw, says Tristano, is attentive, friendly service. “It’s all about the ambiance and the servers,” he says. “You don’t go for the food.”
Tilted Kilt’s Hanby agrees: “A lot of people are selling beer and food. So to win we’ve got to be spectacular and different.” He boasts of Tilted Kilt’s “upbeat atmosphere” and “entertainment in the form of interaction.” Guests don’t just ogle the servers, they’re given permission to engage, he says. “They can open their mouths, they can have a dialogue.”
Tilted Kilt servers, or “cast members,” as they’re known, are “sassy,” “sexy fun,” and “sexy smart,” Hanby says. Training focuses on how to make a connection with the guests and provide entertainment value. “Most of the girls have a shtick, and we work with them to develop it.” Tilted Kilt’s CEO Ron Lynch has spoken of servers employing “touchology” ~ touching the table often, and making guests feel at home. “Sometimes waitresses are providing the best part of a guest’s day,” he says. 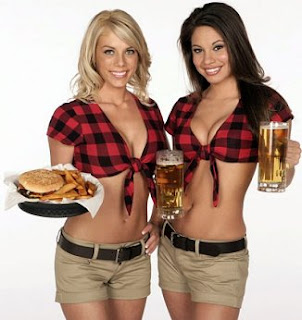 Twin Peaks’s servers even connect with regulars on social media, sharing what shifts they’ll be working and daily specials. Such friendly details provide ample opportunity to “upsell,” industry-speak for increasing the bill. At Twin Peaks, for instance, servers taking a beer order will ask, “Do you want the ‘man size’ or the ‘girl size’?”
Hanby, who talks of “keeping it PG13,” insists the line between banter and flirting is not crossed: “It should not be sexual in any way, shape or form.” He doesn’t shy from the “breastaurant” label but says they don’t use it internally:
“We never refer to our servers using a part of their anatomy,” he says.
“We’d never put the ladies in a position that would objectify them,” a comment at odds with the publication of the annual women of Tilted Kilt calendar. Hanby doesn’t deny the concept is based on the “sex sells” truism. “There’s sex appeal involved,” he says. “We don’t back away from that. It’s part of life every day, everywhere.”
Expect more of it. Tristano sees room for another 500 “breastaurants” in the U.S. and 200 to 300 in Canada. Small chains are starting to jump on the trend, he says.
As for the female-equivalent “chestaurant,” Tristano sees little likelihood of that: “Women are more focused on the food experience,” he says. “There’s a big difference in what men want.”
Meanwhile, the Tilted Kilt has registered its cutesy-naughty name internationally. Asia and former Eastern Bloc countries are ripe for expansion, Hanby says. As for taking the concept to Scotland, home of the first tilted kilt? “That’s not on our agenda,” he says. “Yet.”