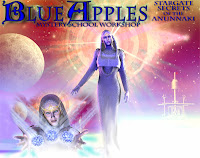 In the following video presentation titled “Blue Apples”, William Henry discusses about Wormholes, Stargates, 2012 … and the Annunaki ! Thousands of years ago, Stargate technology from an ancient alien civilization on Earth was lost. The keepers of this technology were regarded as gods. In Blue Apples, you’ll find the greatest secret of Christianity, its origins with ancient Sumeria, Egypt and the keepers of this ancient stargate technology.

According to legend, ‘Blue Apples’ refer to an astounding supernatural power and the key to humanity’s spiritual liberation and immortality. Joshua, Moses, Nimrod, Mari, Nebuchadnezzar, Jesus and all the alchemists of the ancient world knew the secret of the Blue Apples. Why does this knowledge remain a secret today? Join investigative mythologist and author William Henry as he presents the untold story of the Blue Apples, and the spiritual teachings of a lost ancient alien culture of enlightened beings known as the Anunnaki, or the “Shining Ones.”