By Illuminator | November 27, 2012 - 12:56 am |November 18, 2012 General Articles
Inventor Jeffrey J Nau  received U.S. Patent 7,663,281  for a magnetic field generating device that is also an anti-gravitational generator.  A primary object of the invention is to provide a generator utilizing electromagnetic forces to provide repulsion by creating an electro-magnetic field.  Now that invention is available for  licensing, purchasing the rights or a royalty agreement.  According to Nau writing in the patent the device can be used to power self-steering levitating cars that would glide above metal guideways.
According to Nau, the magnetic field generator utilizes two concentric rings with similarly charged electro-magnets to repel the rings in opposite orbits around an electrically charged central core to create the magnetic field.

Nau asserts a compact magnetic levitation vehicle or car can provide passenger comfort consistent with automobiles and travels suspended on ferromagnetic rails in evacuated tubes of minimal radial dimension extending between vehicle loading and unloading stations or at atmospheric conditions.
A pair of guides extend outwardly along opposite sides of the vehicle and contain magnetic elements. Electrically conductive, ferromagnetic, magnetic, or electromagnetic sections in the rails correspond to the magnetic elements in the vehicle guides. Linear motors or controlled interaction with rail members provide propulsion and braking. Extensive portions of the evacuated tubes are provided with two sets of rails, one set of rails functionally located above the other.
Rail switching is accomplished by selectively interacting with alternative levitation rails which are located at switching locations. Tube evacuation may be supplemented by vacuum pumps on the vehicle to draw in air during travel. The vehicle may have turbines which draw in air and exhaust compressed gases into cylinders.
FIG. 1 is a cut-away perspective view of the anti-gravitational generator 10 having a solid conductive sphere 12. The anti-gravitational generator comprising a central sphere 12 surrounded by an inner ring 14 within an outer ring 16, rotating about a vertical axis. A spherical core 12 is comprised of a core of conductive material and dielectric material insulated from outer engine casing, the outer surface is conductive/dielectric lines running vertically from pole to pole. Around the core 12 is an inner ring 14 that spins in one direction, looking from the top, counterclockwise, it is charged in one direction through brushes. An outer ring 16 placed around the inner ring 14 will spin in the opposite direction, clockwise and will be charged with an opposite flow of electricity through the brushes. Bearings and dielectric insulation are used to maintain electrical separation of inner and outer rings. The interface area is what drives the inner ring 14.

FIG. 2 is a cut-away perspective view of the anti-gravitational generator 10 having a spherical core 12 of conductive metal 20 with interdisposed dielectric material 18. Theanti-gravitational generator 10 is a gravity-opposing repulsion generator comprising a spherical core 12 surrounded by an inner ring 14 within an outer ring 16 rotating about a vertical axis. Shown are the clockwise rotation 50 of the outer ring 16 and the counter-clockwise rotation 52 of the inner ring 14. The core 12 is charged through the conductive mounting rod 22. the entire unit is enclosed within a housing 34 as depicted in phantom line. 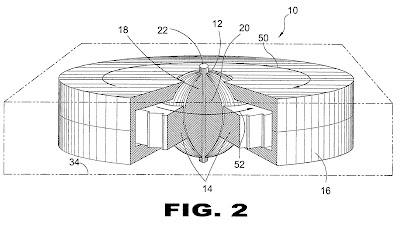 FIG. 11 is an illustrated view of the induced magnetic field 62 provided by the present invention. As electrical input is evenly increased, the rings 14,16 will drive faster to a point where a resultant magnetic field 62 forms by charging the core 12, the magnetic field should increase.

The object of the invention is to:

If you are interested in licensing, purchasing the rights to the above invention or entering into a royalty agreement please contact the office of Michael I. Kroll as follows: