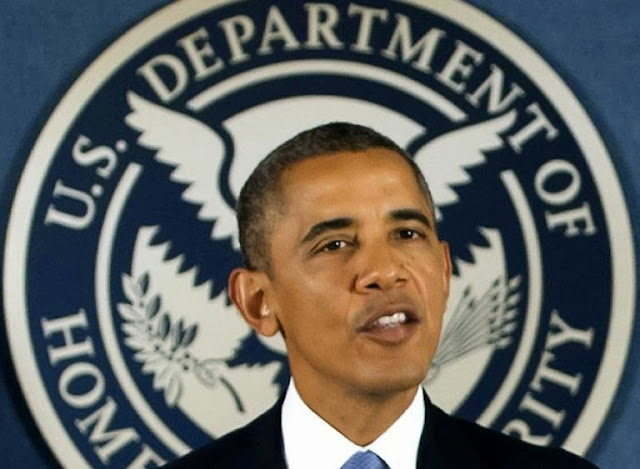 It doesn’t take a particularly astute media observer to point out that Barack Obama has generated some extreme responses from the American public.  It’s tempting to say Americans either love him or hate him, but the former option seems to be dwindling….you’d be hard-pressed these days to find people who still say they “love” him.  On the contrary, there’s no shortage of hatred out there.

The kind of rhetoric in which we’ve been most interested here on LoS uses the language of religion.  In the giddy days following his election we began to hear of supporters speaking as if Obama were the Savior.  The Messiah in the form of a skinny lawyer from Chicago.  While this was partly conservative satire of liberal response to his election, there were grounds for the criticism.  For example, a 2008 cover story about Obama’s popularity in the German magazine Der Spiegel was entitled Der Messias Faktor (The Messiah Factor).  Newsweek’s January, 2013 cover on Obama’s reelection was entitled The Second Coming.

It occurs to me that both identifications serve to arouse the ire of religious conservatives; on the one had there are the people who genuinely believe that Obama is the harbinger of the End Times.  On the other hand there are those who are offended that the media would make a comparison between Jesus and any secular figure, let alone one with whom they disagree politically.  And then there are those who doubt his nationality and religious allegiances or feel a vague if not explicit uneasiness about what a mixed race President means for the future of the country; it becomes easier to understand why intimations of saintliness provoke–at a minimum–a hostile response.  In an atmosphere as polarized as America today, where concession becomes a kind of treason, the rhetoric will become even more uncompromising; Obama not only isn’t saintly, he’s downright demonic.  This is also why people will overlook their doubts about a baffling health care plan full of flaws and unanswered questions and proclaim their unreserved support for something so obviously “good” and why others would prefer to shut the government down than accept something which is so obviously “evil”.

In this context, which is not a historical abstraction but a reality of the here and now, the image above will generate a certain Internet buzz or at the very least a ripple of murmurs.

Drudge asks:  are those a devil’s horns or the wings of an angel?  Are we are seeing Obama portrayed as a modern-day Hermes?  For some a welcome messenger and guide, for others a presumptuous conductor of souls trying to assume the role reserved for He of whom Obama is but a pale pretender?

Should we take note of the olive branch of peace or the sheaf of arrows?  13 leaves or 13 arrowheads.  Forget the symbolism of of the original 13 colonies, we all know what the number really means, right?  War and peace, black and white, give and take.  Not much of this last dynamic happening on the tiled floors of Congress.

This photo was shot by AFP photographer Saul Loeb as Obama spoke about hurricane preparedness in the context of the budget debate and, as the captions says, on the 7th day of the government shutdown.  Not so effective as an “Obama as God” portrait; to be accurate Obama would have to be resting….

But the wings or horns? photo gets at the heart of the social polarity in America today, which is not only being played out physically in Washington D.C., but in the mind of the country, where the war is being fought with symbols.  And if this is happening in the halls of Congress and in the American Mind, it would, at least for millions of Americans, indicate a spiritual war as well.  We can see the shadows on the wall engaged in furious struggle; it stands to reason there’s something important going on outside the cave.

Somewhere out there, Jesus and Satan are locked hand in hand over the chessboard, tiled black and white, no give, no take. 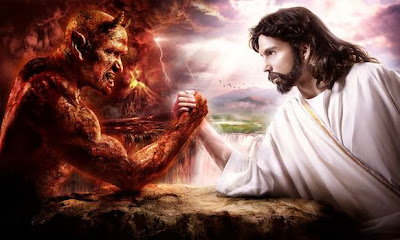 Angel or Demon?  Antichrist or Messiah?  Choose your own adventure!

For further reading, here’s a list of some other posts where we looked at odd photos of Obama, along with a few additional remarks in light of what I’ve mulled over today.  In some cases, I linked to online reactions to them and in others I’ve only now sought it out.  For the rest I don’t know how people reacted….

Barack Obama: Hogwart’s Alumnus 08/15/12
In this odd picture, an academically-robed Obama is shot in such a way that he appears to be holding a glowing ball of light while giving a speech about health care.  I think the photo was intentionally imitating a crystal ball, symbolizing that nobody knows exactly what the future would bring with regards to Obamacare.  At the time, the photo elicited mostly bemused reactions, but there were some half-serious comments out there to the effect that the liberal media were suggesting that Obama is some kind of magician.  Which of course has the additional capacity to offend as a celebration of the occult.
“Barack Obama is the Antichrist!” 03/23/12
In another health care-related image, the Huffington Post placed a photo of Obama holding his hands in the air, hand in hand with his colleagues, next to one of a Byzantine mosaic of Jesus in a similar pose.  The image was used to illustrate an article about Notre Dame (the university) suing the Obama administration because his plan mandated that birth control be covered.  Is HuffPo taking a swipe at Notre Dame, comparing Obama and Jesus as two men who would advocate taking care of the poor?  Or does is symbolize a face-off between secular and religious belief?  I didn’t read any comments on this photo, but I can only imagine that for many people there would be nothing innocuous about its rhetorical or symbolic intentions.
The Royal Obamas: personally blessed by Christ the Redeemer 03/21/11
In this shot the Obama family is seen from below, Rio’s Christ the Redeemer glowing in the background.  This photo generated significant online commentary by many who saw it as crude propaganda that associates the Obama family with holiness;  the nimbus of white light, the protecting arms of Christ looming in the background, the angle of the shot which is as if the viewer gazes up at the family….
An intellectual regarded disparagingly, as being impractical, officious, pedantic, etc. 08/04/10
In this shot Obama has a weird haughty look to him, his up-tilted head framed in such a way at to form a kind of circle within a black triangle  I didn’t see any comments about this one, but I wondered then if Drudge used it to a) suggest the Eye of Providence to recall the Illuminati, a kind of guilt-by-association tactic or b) suggest a black KKK hood, evoking the reverse racism the man is accused of harboring not so deeply within.  (A quick search of the image does reveal that in a few instances people associated with the NWO, the Eye in the Pyramid or a pyramid with detached capstone.)
Political Saviors 03/18/10
This is a series of shots where both Democrats and Republicans are framed so that they appear to have halos or appear at the center of the cross.  I think these are certainly intentional and probably satirical comments on how politicians frame their political discourse in moral terms.  This set does not include Obama.
Obama as Jesus, or Hippocrates? 03/17/10
This was also a controversial shot, which generated a firestorm, or a least a fire-shower, of online comments.  Obama appears to have both halo and nimbus and a white cross hovers in the background.  Like the Rio pic, it is shot from below so we are looking up at him on high.  In this case, the cross was not part of the shot but was photoshopped into the image.  Conservative commentators saw an example of liberal bias, the deification of Obama.  This shot was used to illustrate an article about health care, which is why, according to some, a cross was an appropriate backdrop.

I first saw this current AFP photo with the question about “wings or horns” on Drudge at about 12 PM in France on 8 October but by 3 PM it was no longer there.  Fortunate The Blaze includes a brief quip about Drudge’s editorial choice, including a screen shot.  Quick work!  The Blaze wrote about it yesterday, so the image was apparently online for a while.  Odd is that Drudge called it a “shock” image, and asked the “horns or wings?” question, but he wasn’t linking to an article; he linked to Yahoo news which merely carried the photo and named the photographer, date and event.  Apparently, Drudge is unaware of the long history of religiously-charged photos of Obama, or merely looking for another small way, like I think he did with the “eye in the triangle” photo, to feed anti-Obama resentment.  Which is his right, of course.  He’s hardly secretive about his political orientation nor subtle with the articles he chooses and the titles he gives his links.
Makes me think of another photo someone sent me and which I put onto my website long ago, not too long after 9-11.  I don’t recall where it came from, and I’ve never seen it elsewhere, except where someone has either hotlinked it or downloaded it and uploaded to their own site.  I guess we can add the horned President genre to world leaders giving dubious “Masonic” handshakes or flashing the famous “sign of the horns” collections so plentiful on the Web.  Just for kicks I did a Google images search on the following image it has been reproduced by quite a few sites around the world.  You can see that all its current online uses ultimately derive from that single source, because they all have the telltale signs of having been scanned from newsprint.  That means a proper digital original hasn’t been made public.  So it’s kind of cool that I let this thing out into the world years ago and it’s still alive.  It’d be interesting to know who took it first and how it spread after that.  But viral standards these days, it’s still pretty limited, but I still have that tattered bit of newsprint somewhere.

So, here it is, SHOCK photo of George W. Bush.  Definitely horns. 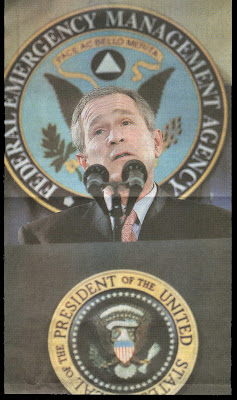