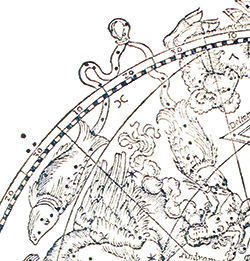 Cultures that view themselves as waning are usually those most likely to tap into doomsday scenarios, especially when the world’s end is followed by universal renewal.

An Apocalypse (Greek: ἀποκάλυψις apokálypsis; “lifting of the veil” or “revelation”) is a disclosure of something hidden from the majority of mankind in an era dominated by falsehood and misconception, i.e. the veil to be lifted…. By extension, apocalypse can refer to any End Time scenario, or to the end of the world in general.

In 1997, a former reporter with the Wall Street Journal, Michael Dronin, wrote The Bible Code, based on the notion that hidden messages are embedded in the Bible. Not surprisingly, considering the uncertainty of the times, The Bible Code quickly became a best seller. Using a numerological system said to be derived from Jewish mysticism and facilitated by computer technology, Drosnin searched for signs of the ‘End Times’ and discovered the years 2006 and 2012 are of special importance. According to Dronin’s Bible Code system in 2012 the Earth will be hit by a devastating comet.

In Dan Brown’s mega best-selling fictional tale, The Da Vinci Code, his lead character Robert Langdon, in answer to a question about ‘the end of the world’, explains:

“Many religions speak of the End of Days. It refers not to the end of the world, but rather the end of our current age – Pisces, which began at the time of Christ’s birth, spanned two thousand years, and waned with the passing of the millennium. Now that we’ve passed into the Age of Aquarius, the End of Days has arrived.”

For Dan Brown and many others we’re not talking about an ‘end of the world’ with all its connotations of the destruction of humanity or the planet, but the transition from one age to another. Bible scholars support this view pointing out that often when the Gospel writers mention the ‘world’, the original Greek word used is ‘aion’, meaning age, or system of things. The biblical ‘end of the world’ refers not to the destruction of all life on the planet but to the conclusion of an allotted period of time, or a system of things. The end of the zodiacal Age of Pisces and the transition to the new Age of Aquarius is marked by a change in consciousness.

The Swiss psychologist C.G. Jung took an interest in the zodiacal ages and concluded we now live in an ‘End Time’ period, the transition from Pisces to Aquarius. Not long before his death in 1961, Jung experienced a series of visions of a future great catastrophe. His long-time associate, Marie-Louise von Franz, claimed Jung saw a worldwide conflagration occurring around the year 2010. Students of Mayan prophecy will be sure to note the close proximity of 2010 to the end date of the Mayan calendar.

Less than a century ago, in the aftermath of the carnage and upheaval of the First World War, many of Europe’s most astute thinkers and writers concluded the Western world was in its death throes. They took the rationalism and materialism engulfing Europe in the first decades of the twentieth century as inevitable symptoms of the slow ‘decline of the West’. Many shared Oswald Spengler’s conviction, persuasively set forth in his 1918 book The Decline of the West, that Western civilisation was in an unstoppable process of spiritual and cultural disintegration.

The great French writer and Noble Prize winner Romain Rolland was amongst those who believed Europe was dying and that the only hope for the world lay in Asia. The celebrated French novelist and adventurer André Malraux also looked to Asia for inspiration. After his first journey to South East Asia in 1923 he openly attacked the sterility of materialistic Western culture, and in the following years he devoted himself to the radical nationalist uprising against Western imperialism that was developing in Indo-China.

A half a century earlier in 1888, the redoubtable Madame H.P. Blavatsky penned a controversial expose of the Catholic Jesuit order for an issue of her Theosophical journal Lucifer. After documenting the conspiratorial activities of the Jesuits, Madame Blavatsky left her reader in little doubt about the coming show down between the East and the West:

“There is a prophecy in the heathen East about the Christian West, which, when rendered into comprehensible English, reads thus: ‘When the conquerors of all the ancient nations are in their turn conquered by an army of black dragons begotten by their sins and born of decay, then the hour of liberation for the former will strike’. Easy to see who are the ‘black dragons’. And these will in their turn see their power arrested and forcibly put to an end by the liberated legions. Then, perhaps, there will be a new invasion of an Atilla from the far East. One day the millions of China and Mongolia, heathen and Mussulman, furnished with every murderous weapon invented by civilisation, and forced upon the Celestial of the East, by the infernal spirit of trade and love of lucre of the West, drilled, moreover, to perfection by Christian man-slayers – will pour into and invade decaying Europe like an irrepressible torrent. This will be the result of the work of the Jesuits, who will be its first victims, let us hope.”

One hundred years after Blavatsky penned these apocalyptic words, ‘decaying Europe’ which for centuries – thanks to ‘the infernal spirit of trade and love of lucre’ – had plundered the lands of Asia, Africa, and the Americas, found itself challenged by fast rising new global powers. The creation of the European Union and the absorption of the former socialist East European states were not enough to stop spiritual and cultural paralysis overtaking lands once identified as the ‘Christian West’.

For much of the twentieth century the United States led the Western world. With the end of the British Empire after World War Two, American economic, social and cultural values steadily became almost synonymous with the ‘West’. Today in 2012 the United States desperately strives to maintain its ‘New World Order’ of global dominance. At home the United States is in major social and economic trouble. In a country where the wealthiest 5% control 60% of the nation’s wealth, many find themselves in agreement with the late American novelist Kurt Vonnegut who remarked just before his death, “Working people have no leverage whatsoever. I’m trying to write a novel about the end of the world. But the world is really ending!”

The Apocalypse and the ‘End Time’ loom menacingly on the horizon. But is it really the ‘end of the world’ or are we witnessing the end of a civilisation that long ago reached its high point and now is in rapid decline? The Piscean Age which dominated the world for roughly the last two thousand years, represented by the Christian West, is quickly fading as we experience the first influences of the coming Aquarian Age. These are tumultuous and challenging times, pregnant with great possibilities, both constructive and destructive. Though an atheist, André Malraux predicted that “the third millennium will be spiritual or there will be no third millennium.” In the end this remains the only guarantee of a future worth living.

If you appreciate this article, please consider a digital subscription to New Dawn.

MEHMET SABEHEDDIN is a researcher, writer and global traveller. He is a longtime contributor to New Dawn magazine. He can be contacted c/- of New Dawn Magazine, GPO Box 3126, Melbourne VIC 3001, Australia.

Read this article and much more by downloading your copy of
2012 New Dawn Collector’s Edition (PDF version) for US$2.95